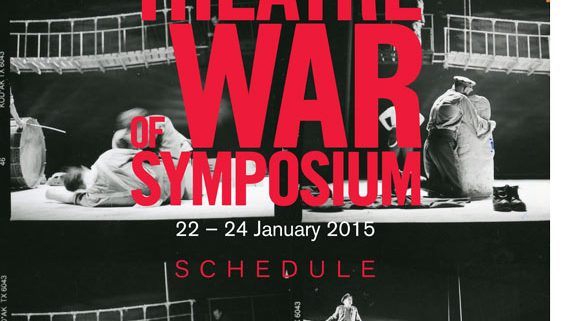 By Andrea Breslin and Orla Lehane

“Tread lightly for you tread on my realities”

Irish playwright Connell Morrison’s above reflection, referencing his attempt to bring his stunning interpretation of Antigone to a Palestinian theatre group, highlights some of the ethical dilemmas surrounding the reduction of the complexity of conflict situations into a narrative for theatre. His 2003 adaptation moved the conflict within the play to a contemporary Middle Eastern staging, where the character of Antigone is portrayed as a suicide bomber. Despite rave reviews in Ireland, upon bringing the play to the Ashtar Theatre group based in Ramallah, he discovered that the play did not adequately reflect the situation of those living in the very area that had inspired the piece.

This was one of a number of themes raised as part of the Theatre of War, a three day symposium at Dublin’s Abbey Theatre, gathering together artists, journalists and academics to reflect on the world’s most troubling conflicts from a global, contemporary and historical perspective, through the lens of theatre. Just as combatants struggle for control in the geographical theatre of operations during war, multiple memories, voices and ideas struggle and compete to be heard and represented in this space. What role does the theatre play in offering interpretations of conflict? How can those working in theatre respect the individual perspectives, representations, and rights of those caught in conflict zones while creating work that appeals to and engages a diverse range of audiences?

As part of the symposium, the one-woman play Oh My Sweet Land, an “urgent and extraordinary play”, was brought to Ireland for the first time by London’s award-winning theatre, the Young Vic. It explores the ongoing crisis in Syria through stories from a selection of its two million refugees. The show, written and directed by Palestinian writer Amir Nizar Zuabi, and performed by Corinne Jaber, is an outstanding example of a work that deals with the pertinent issues. It weaves the stories of a number of Syrian refugees together in a mesmerising piece of drama, while emphasising the brutality of the war and the effect it has on the lives of those caught up in it: “They call it a civil war, but there is nothing civil in this. Nothing civil at all”.

The play charts one woman’s journey from Paris to Lebanon, into Syria and onto Jordan to track down a friend, Ashraf, among the innumerable Syrian refugees in each country, listening to the tragic stories of violence, chaos and loss experienced by those who have fled.   During the Theatre of War symposium, Zuabi spoke passionately of the important role that theatre plays in contributing to the complex discourses surrounding conflict, describing it as the “most humane” of the arts and the “most intimate” of encounters. It is, he believes, a way to react to the world around us. Oh My Sweet Land does just that, inspired by the stories of refugees that Jaber and Zuabi met in the camps they visited in Jordan. Having, they explain, been inspired particularly by the spirit of those they met and their ability to adapt, the play gives these individuals a voice. The audience learns something of their lives and the effect the war has had on them, the loss of their homes and possessions, the death of family members – husbands, wives, children. The cruelty of their attackers is presented. But ultimately, through individual stories that go beyond reductionist news headlines and media sound bites, those that Jaber encounters on her journey remain human. One little boy she encounters notes with sombre resignation “What happens to all will happen to us”.

Zuabi’s view regarding theatre was echoed by other speakers at the event, with many of those creating theatre in conflict zones speaking the most passionately of its power. ‘Theatre is alive!’ proclaimed Hope Azeda. Azeda works in Rwanda harnessing theatre to explore concerns related to human rights and violence that have stemmed from the genocide in the country, investigating the dichotomy between victims and perpetrators and asking whether the perpetrators of tomorrow could be the victims of yesterday. Theatre allows her to discuss these themes with young people; important, she explains, because, in accordance with an old Rwandan proverb, “you cannot straighten an old tree”.

Based in Serbia, Dijana Milosevic also emphasised the important role that theatre has played in giving a voice to those who have lived through conflict, while noting the complexity of representation. She co-founded DAH Theatre in Belgrade in 1991: inadvertently coinciding with the outbreak of war in the Balkans. Questions troubling Dijana and her colleagues at first were whether or not they had the right to make theatre when there was so much suffering going on around them, and the very existence of suffering in a war that was supposedly being fought in their name. This led the group to creating anti-war theatre and performing in the streets. While their activities generated many difficulties, the performances was also well received with many audiences. The power of theatre as a form of resistance became clear to the group.

The notion of theatre as resistance was highlighted in the Keynote Speech at the symposium, with Professor Luke Gibbons referring to the cultural sphere as the ‘counter public sphere,’ and throughout the three day event the role of theatre as a site of resistance was emphasised. The President of Ireland, Michael D. Higgins, counselled us in his Keynote Speech of the previous Theatre of Memory, also at the Abbey Theatre, to do justice to the complexity of context, to read events critically from any standpoint, and to avoid jeopardizing historical accuracy. Much of this discussion remains relevant to the Theatre of War, which explores conflict from individual perspectives through individual stories, while also attempting to avoid negating the multiplicity of identities in the complex conflicts involved.

Other forms of theatre have similarly attempted to interrogate and engage with the themes of violence, whether structural or individual. One example is the Theatre of the Oppressed, born in Brazil of the ideas of Augusto Boal, combining participatory techniques, aiming to critically engage the structures of power and oppression and reshape them through action.

The Theatre of the Absurd also questions depictions of rational human existence and accepted reality/status quo, exposing the inherent absurdity by portraying a world without logic or morals, avoiding conventional plot and narrative techniques. It embodies a ‘revolutionary attitude’ towards language and convention, portraying the world as an ‘incomprehensible place’ where the audience struggles to comprehend and identify completely with the events or characters involved. The recent outcry surrounding the threat to ‘freedom of expression’ regarding the Charlie Hebdo incident in Paris was described as a form of theatre of the Absurd in a recent article, neglecting as it does the structural violence meted out to many countries in the last decade, the retrogression regarding freedom of expression in many European countries, and many other points of contention.

This Theatre of War has a much broader focus, intending as it does to employ the medium of theatre to explore conflict from many different angles and perspectives. Theatre artists from Burundi, Columbia, Syria, Palestine, Rwanda, Ireland and the United Kingdom discussed the challenges of artists responding to conflict. Perhaps a quote from Martin Esslin concerning the Theatre of the Absurd is also fitting for this Theatre of War, which also resists clear-cut resolutions for urgent contemporary issues, and leaves us still questioning: “while the solutions have evaporated the riddle of our existence remains – complex, unfathomable, and paradoxical.”

Drawing the line between the freedom of expression and the prohibition of hate...
Scroll to top