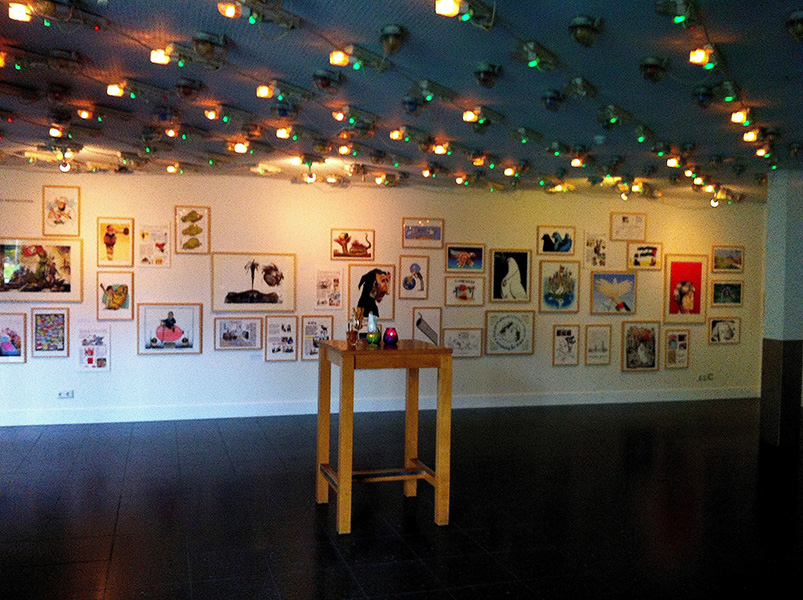 The Alliance Française presents a three months exhibition in the lounge of the Gember restaurant of GEM/ museum in The Hague. The exhibition is free of charge, orchestrated by the non-for-profit organisation Cartooning for Peace, and more information can be found here.

Drawings, paintings as well as sets of pictures and articles produced by more than 40 cartoonists from all over the world are displayed on three walls, around three topics : Peace and Revolutions; Freedom of Expression; and Human Rights.

The first striking thing is that the right to Freedom of expression benefits of a “category” of its own, alongside the “Human Rights” section of the exhibition. And this is understandable, given the event that led to the creation of Cartooning for Peace. In January 2006, a “fatwa” was launched against Danish cartoonists who had represented the face of the prophet Muhammad in their works. Protests, death and debates in a lot of different areas of the world had followed the release of these drawings, and in October 2006, Kofi Annan, Secretary General of the United Nations at the time, brought together the 12 most famous cartoonists in the world in order to create a debate about the “editorial responsibility of the drawings they were publishing”.

The present exhibition is born from a collaboration between the french cartoonist Jean Plantureux (known as PLANTU), and Kofi Annan, as well as other cartoonists who were willing to give their voice through their drawings on the topic of violations of human rights.

The “Peace and Revolutions” section shows the works of cartoonists such as DILEM (Algeria). His drawing is titled “Les pays arabes découvrent les Simpsons” (“Arab countries discover the Simpsons”) and pictures Homer, the main character of that show, with a beard as long as his wife Marge’s hair.

The work of RIBER (Sweden), displays a minaret mounted on top of a tower made of ballot boxes, as if their only value was to have allowed the power of the religious power.

Further on the wall, a frame contains a set of pictures and press articles about Ali Ferzat. Ali Ferzat (Syria), is a 62 years old cartoonist who published his first drawing at the age of 12. As he puts it, the very good reception of that drawing by the newspaper Al-Ayyam confirmed to him that he was “on the right track”. Ali Ferzat speaks of his drawings as satires to depict dictators who use oppression against people. His wish is that they will give people hope that these dictators are “empty”, and that they will give them courage to criticize the power in place. He believes that his drawings “carry human causes”. He says so in an interview orchestrated in 2012 by Vanessa Rousselot, a French film maker*. During the interview, Ali Ferzat comes back on an event that happened to him on 25 August 2011. As he was leaving his office that morning at 5 o’clock, the streets were dark and he noticed a car following his. As he had stopped at a traffic light, masked and armed men came out of the mysterious car and approached the doors of Ferzat’s car. They broke the door, put a bag on his head, handcuffed him and started beating him up in his seat during approximately ten minutes. They then took him out of his car and brought him at the back of the other vehicle, where they made him sit with his head between his legs. They put his hands on the top his head, removed the handcuffs, and each man sitting on both sides of him beat up his hands for 5 minutes. Before doing that, one of them told the other attacker : “Break his hands, so that he cannot draw Assad anymore. Break his hands, so he learns”. Ali Ferzat lost consciousness and was thrown out of the car shortly thereafter. 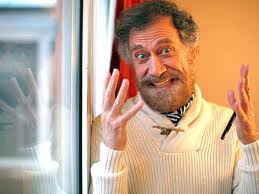 In the section titled “Freedom of Expression”, the work of Mana Neyestani (Iran) shows a drawing divided into three portions. In the first one, we can see the head of a singing man. Notes are coming out his mouth. In the second portion, a hand is placed on the man’s mouth, silencing him. In the third part of the drawing, the man is singing harder – one can tell from the expression on his forehead, and the notes come out again, this time of the elbow of the silencing arm.

Another frame contains a set of pictures and cartoons of PLANTU’s work in the newspaper Le Monde to depict the debate about the danish cartoons scandal. PLANTU represented in one of his cartoon an amalgam of handwritten sentences from which the prophet Muhamad emerges : “Je ne dois pas dessiner le prophète Mohamet” (“I shall not picture the prophet Muhamad”).

The “Human Rights” section displays different works on the topics of the rights of women, homosexuality etc… GATTO (Italy) produced a painting of a page of the Universal Declaration of Human Rights, on which two men are walking, in opposite directions: one Masai man, and one man dressed in a trenchcoat. He looks like a French or an English man and has a briefcase at his hand.

ZAPIRO, who is South African, titled his work “Nelson Mandela : the early days”. The cartoon shows the class room in which young south africans were asked to write a piece on the subject : “What will I become ?”. The teacher, pointing to young Nelson Mandela informs a colleague who had just walked into the classroom : “This one cannot make up him mind. He answered : activist, president etc….”

One drawing was particularly moving : BENEDICTE’s drawing (Switzerland) shows a pile of notes (presumably dollars) and a woman sitting on a limon press instrument. Both items have the same size, as if the woman was not more important than the money present in the drawing. A hand holds the head of that young woman and “turns” her on that machine, and money is “juiced” out of her. The movement of that woman – who looks like a child – her head half turned over her shoulder towards us in a humiliated and hopeless attitude, express better than words the desperate positions in which these people are. Nobody is coming to their rescue.

What is at stake through the project of Cartooning for Peace? Reconciliation of differences? Being free to express one’s own opinions? Being a free spirit? Each of these cartoonists have their own motivation. For some, it’s about the lives of others, the rights that others cannot exercise. For some, the stake is very high. Their physical integrity, like in the case of Ali Ferzat.

Their life, like in the case of Kais al-Hilali, a Lybian cartoonist who was famous for the drawings he made on the walls of Benghazi, the Lybian city. He was assassinated in the evening of 20 March 2011. Three companions had asked him to come that evening to draw something on a wall. Once they had arrived in a street, they met with a man who shook Kais’ hand. The Man asked: “Are you Kais?”. “Yes”, Kais replied. The man then took out a gun, and before anyone could do anything, the 34 years old artist was shot dead.

* The interviews orchestrated by Vanessa Rousselot in the context of Cartooning for Peace can be found here in English, and here in French. An interview in French of PLANTU can also be viewed here.

Welcome to Creating Rights! The Act of Documenting
Scroll to top