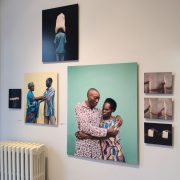 How is it possible for art to capture and represent the nature of large-scale massacres ? the desolation of ravaged countries ? the end of a man’s impunity as well as the end of his freedom ? testimonies on unforgettable and intolerable events ? the attempts to establish the truth ? the ever unanswered questions of victims ?…

In other words, is it possible for art to encapsulate the various aspects of the vast issue that is the accountability of men for large-scale crimes? By making these aspects visible, can art participate in raising awareness about the role and processes of international justice ?

That is apparently the belief of William R. Pace, Convenor of the Coalition for the International Criminal Court (CICC), an international non-governmental organisation advocating to strengthen international cooperation with the International Criminal Court (ICC). Indeed, the CICC launched an Arts Initiative last April aimed at enriching the dialogue on global justice. The Coalition’s Arts Initiative to End Impunity was inaugurated with the screening of The Enclave, an audio, video and photo installation on the conflict in the Democratic Republic of Congo by the artist Richard Mosse.