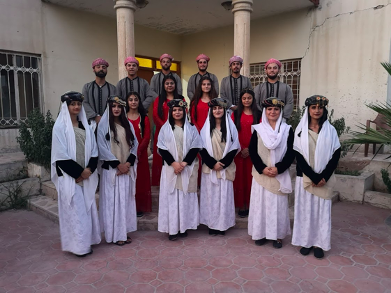 In their Acting Together on the World Stage documentary, Theatre Without Borders and Brandeis University argued that art could be used as a way to resist oppression, to reconcile, to raise awareness about human rights violations but also as a way to heal and to reconstruct oneself. Since I’ve watched the documentary, more than a year ago, I have never come across art used as a healing process – most of my Creating Rights articles are therefore focused on awareness-raising through painting, photography, or poetry. However, the Amar Foundation uses art, and in particular, music, to help the Yazidi community heal from the genocide they have suffered at the hands of the Islamic State.

The Yazidis are a Kurdish speaking minority from the Sinjar area, in Iraq and Syria. They do not, however, identify as Kurdish as they have a different religion – Kurds are mostly Muslims while Yazidis follow Yezidism. The most famous Yazidi activist is Nadia Murad, the 2018 Nobel Peace Prize Laureate. She won the prize “for [her] efforts to end the use of sexual violence as a weapon of war and armed conflict”.

In her autobiography, The Last Girl, Nadia Murad tells her story, and with it the story of her people, the Yazidis. In 2014, the Islamic State attacked her village, killed most of the older men and women, and kept the younger women, girls, and boys as hostages. The boys were indoctrinated into becoming ISIS fighters at the cost of rejecting their community, religion, and their own family. The women and girls were used as sex slaves or sabaya as is referred to in Arabic. They were sold, tortured, humiliated and often passed around to the group’s militants as gifts, an attempt to strip away their dignity. All Yazidis were forced to convert to Islam. Nadia Murad was one of ISIS’ sex slaves. She was not the only victim, most Yazidi women suffered her fate. But she is the one who spoke the loudest and managed to get the international community’s attention.

The United Nations have since then recognized that ISIS actions constituted genocide. Indeed, those atrocities did not happen out of coincidence, they had been carefully planned. Before invading the Yazidi region, the Islamic State’s Research and Fatwa department studied Yezidism and concluded that, unlike other religions like Christianism or Shia Islam, Yezidism was not a religion since it did not have a holy book. According to the Islamist scholars, this meant Sharia law authorized its fighters to kill and rape and walk away with impunity. Often, while in captivity, Yazidi women were called devil worshipers and their captors would pray before raping them, the rape was a holy act of war.

Today, the Yazidi women who escaped are either in camps in Iraqi Kurdistan or in other parts of the world living as refugees. In the Kurdish camps, but also in London, the Amar foundation has been teaching and recording traditional Yazidi music. Although the programme is led by British violinist Michael Bochmann, teachers and musicians are Yazidi, and the project has been approved by the Yazidi spiritual counsel.

Yazidi music is not traditionally written down but passed from one generation of qawals, (religious musicians) to another. And, as of today, only eight qawals are still alive. In order for this tradition not to be lost and in an effort to keep the Yazidi culture alive, the foundation is recording and sending the music to Iraqi and British museums’ archives. It is especially important to do so now, as their community has been so close to being totally destroyed by the Islamic State. Ali, a music teacher, explains that “Yazidi music is ancient and very important to our culture. As a minority, it keeps us together”.

Aside from recording, the foundation is also giving music classes: students can learn how to play the drum, the tambour (a sacred instrument to the Yazidis) and can be part of the women choir. For them, it’s not only music but also a way to practice their religion and a way to heal. A qawal explained that the music dates back to the Sumerian civilization, and already then it was used as therapy. A young rape victim confirmed its healing effect. She testified that, after being enslaved and having suffered such a “bad experience”, joining other musicians made her “feel happy and relieved”. Another former sex slave stated that “[they] are always thinking about how bad life is here [in the refugee camps] and [they] often feel very sad, but coming to the music classes help [them] forget [their] sadness”.

This is my interpretation of the situation, but I think that it also helps and reassures those women to be part of the community again. In her autobiography, Nadia Murad explains that Yezidism strictly prohibits conversion to another religion and sexual intercourse before marriage. Since Nadia Murad and so many others had suffered rape, torture and forced conversions, they risked being rejected by their community upon their return. This was a deliberate tactic by their captors. ISIS soldiers would tell their sabaya not to escape because even if they managed to flee, they would be rejected by their community. They argued it was better for them to stay in the Islamic State where they were welcomed. Eventually, the Yazidi high clerks announced that all Yazidi women, even if they had converted or had been raped, would be welcomed back. Their sins would be forgiven because they had been forced upon them. After fearing exclusion from their community, the women must be reassured to be back in the group, to be back singing Yazidi songs.

A choir composed only of former ISIS victims, singing traditional Yazidi songs, is a particularly beautiful image: the Islamic State forbad music, and now the same music they were prohibiting is helping their victims heal.

An account of three Movies that Matter: Freedom of Expression and the State
0 replies