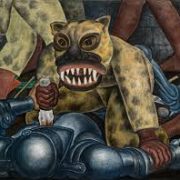 Strolling along Berlin, it is impossible to overlook the numerous graffitis and, after all, mural art work visible at every street corner. Public art, which is what mural art has developed into, is part of our everyday media consumption, walking to the bus station or waiting at a traffic light. Political views and discussions are exchanged through symbols, words, and paintings, on walls and on buildings, in many cities around the globe.

In Berlin, the most prominent example of mural art is the accumulation over decades of layers of paintings and graffitis on the Berlin wall, the symbol of the division between two political ideologies, regimes and economic systems as it took place in one city. As shown by the Wall on Wall project, the Berlin wall, the Peace Line in Belfast, or the wall in Palestine are examples of dividing constructions which have been re-used as visual platforms for individual expressions of collective emotions concerning such disunion.