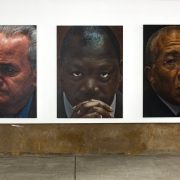 Weights and Measures: Portraits of Justice is a socially engaged art project focused on international law and human rights work, to evoke civic dialogue in post-conflict societies and hubs of international justice.

For the past year, Creating Rights has been providing an active support to the completion of the Weights and Measures project by being a direct actor in The Hague, The Netherlands, the city of international justice. We conduct research and provide advice in one of our areas of expertise, international criminal law. We also act as a liaison with key actors in the fields of art and international justice based in The Hague.

Designed by American artist Bradley McCallum and supported by Conjunction Arts and various partners such as Creating Rights, Weights and Measures is an international exhibition with the aim to start a discussion on the underlying issues of international justice, through portraiture.

It comprises large-scale oil paintings of defendants, photographs of justice practitioners and audio installations of witnesses and victims. The paintings reflect the ways powerful men accused of war crimes and genocide are held accountable internationally; the photographs are intimate portrayals of leading justice practitioners who have been instrumental in promoting social change; the audio installations represent the experiences of victims and witnesses through their own voices. Combined, the works are a collective social portrait of international justice efforts around the world.

The artworks will be displayed in different parts of the world, starting in 2017 in South Africa, alongside conferences, and embedded in public programming with partner organisations. During the project, a dedicated online platform will be created to listen and engage with the oral histories. In addition the audience will contribute, as they experience the work, to create a virtual experience by sharing their experience of the exhibition and discussing the underlying issues pertaining to international justice.

On 21 November 2016, the WAYAMO Foundation organized a side-event to celebrate the one-year anniversary of the creation of the Africa Group for Justice and Accountability (AGJA). On this occasion, a panel discussion on the future of international justice and its challenges gathered members of the AGJA, as well as artist Bradley McCallum who introduced his project Weights and Measures: Portraits of Justice. A preview of the exhibition was visible during this side-event.

In February 2017, a preview of the exhibition took place at Constitution Hill, in Johannesburg, South Africa. This was also the opportunity to hear distinguished speakers such as Kelly Jo-Bluen, Richard Goldstone, Kaajal Ramjathan-Keogh, and Navy Pillay on the domestication of international justice law in Africa. On 28 and 30 March, the exhibition opened to the public at the Johannesburg Genocide and Holocaust Center and at the Men’s Prison where artwork was displayed.

International Justice faces challenges that need to be addressed

On 21st November 2016, the WAYAMO Foundation organized a panel discussion to celebrate the one-year anniversary of its Africa Group for Justice and Accountability (AGJA) : Through the Looking Glass – Imagining the Future of International Justice. This discussion, organized as a side-event to the Assembly of States Parties to the Rome Statute (ASP), sought to explore the future of global accountability in the light of the recent declaration of withdrawals of South Africa, Burundi and Gambia from the Rome Statute of the International Criminal Court. More particularly, and through a preview of Weights and Measures : Portraits of Justice, by American artist Bradley McCallum, it explored the question of opening a dialogue on the challenges faced by international criminal justice. 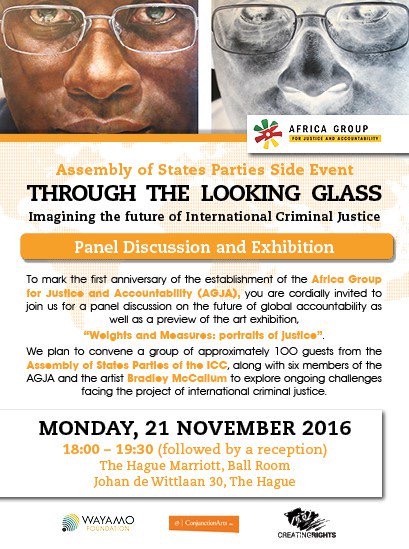 Members of the AGJA participating to the panel were Dapo Akande (Nigeria), Richard Goldstone (South Africa), Hassan Jallow (The Gambia), Athaliah Molokomme (Botswana) and Fatiha Serour (Algeria). The discussion was moderated by WAYAMO’s Research Director Mark Kersten. These prominent members tackled in a compelling way the difficult question of how a global system of international justice, while contemplating its achievements, will face and discuss challenges and, if necessary, renew itself.

Following introductory remarks by Bettina Ambach, Director of the WAYAMO Foundation, the President of the ICC Silvia Fernandez de Gurmendi reaffirmed that addressing the current difficulties faced by the ICC must be taken seriously and done in an appropriate manner. She put international criminal justice in an historical perspective, recalling that it was a long-term project, requiring efforts to preserve accomplishments and to move forward. Professor Dapo Akande also interestingly placed the discussion on a historical level, emphasising on the fact that this particular moment in time – seeing countries leaving the global justice system they helped to build, as recalled by Richard Goldstone – is part of a process going in the « right direction ». As stated by Hassan Jallow, this process encompasses various elements, such as international tribunals, domestic jurisdictions, and regional mechanisms, each possessing their advantages and disadvantages. President de Gurmendy had also recalled that the role of the Rome Statute goes beyond the reach of the ICC, referring to the definition of crimes in national bodies of law. In that sense, a global justice system is designed to encompass not only international institutions, but also regional and domestic jurisdictions : a « mutually reinforcing global justice system ».

Fatiha Serour emphasized on necessary elements that must be present when setting up a dialogue : respect, trust, and mutual understanding. With these ensured, addressing concerns and working towards identifying common core values can take place. The common core principle, or goal, is stated in Security Council Resolutions 827 and 955, founding the ICTY and the ICTR, as well as in the Preamble to the Rome Statute: to deter the recurrence of international crimes, and to hold the persons responsible for these crimes as accountable. Allowing for a dialogue on the difficulties faced by a global system is necessary to ensure that the international criminal justice process fulfills this goal, also referred to as the « fight against impunity ».

This aim is not as such questioned by the actors of international justice. Indeed, South Africa, in its letter of withdrawal, reiterated its commitment to justice and accountability. Similarly, even though the reasons of Burundi and Gambia for wanting to leave the ICC differed from those put forward by South Africa – they both referred to a policy of the ICC they deemed « racist », the two countries still did not imply that impunity should prevail over accountability for international crimes.

The challenges to be discussed pertain rather to the way the goal is achieved, i.e., for example, the application of the law on immunities, enhancing capacity building for national jurisdictions, reflecting on the role of the Security Council in the referral process to the ICC, or reinforcing complementarity. It is suggested here that similarly, issues pertaining to principles such as the presumption of innocence (from which fair trial rights and more generally the rights of the Defence ensue from) must be part of the dialogue. Indeed, the fight against impunity cannot be achieved if all parties involved do not seriously think that the court is able to fulfill both its repressive and protective functions. 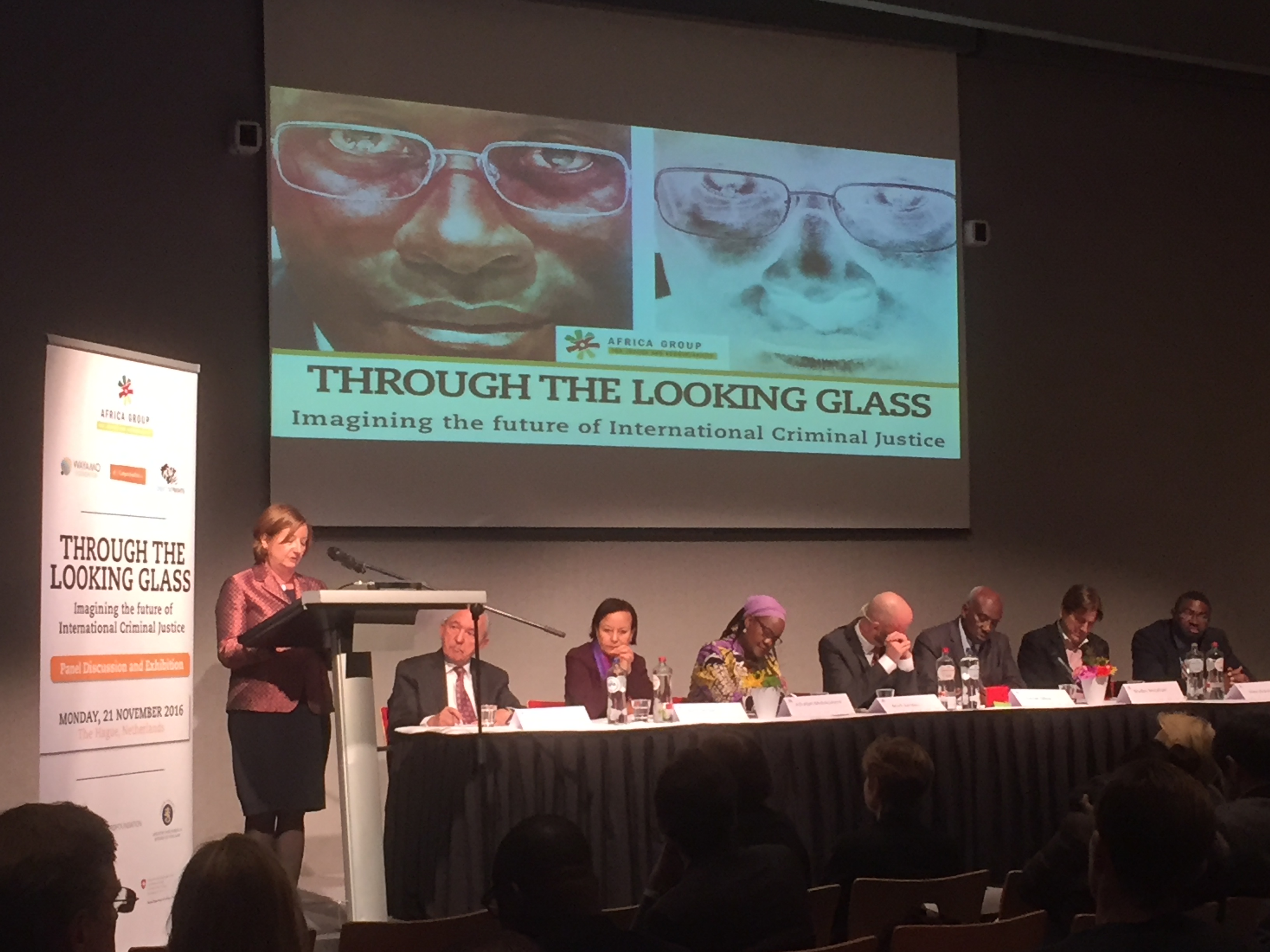 From a system to a culture of international justice

The way to construct this dialogue is manifold. The panel discussion organized by the WAYAMO Foundation added a significant stone to the edifice, as have different working groups and conferences that took place since South Africa’s announcement in October 2016. Not to mention the ASP taking place every year, where many decisions concerning the functioning and the policies of the ICC are made. In this respect, the will of the WAYAMO Foundation to collaborate with artist Bradley McCallum in presenting his project Weights and Measures : Portraits of Justice, is telling of the existing interest towards the different and unconventional ways to build a dialogue around the challenges faced by international justice. Beyond the culture of justice that is promoted by institutions such as the WAYAMO Foundation, is it possible to build a culture of dialogue about international justice, inclusive of all viewpoints and able to tackle difficulties and challenges ?

Weights and Measures : Portraits of Justice is a global art project by artist Bradley McCallum, dedicated to connecting people from different communities, through the universal language of portraiture. After four years of research, including a one-year residency with the Coalition for the International Criminal Court, the project evolved to encompass painted portraits of individuals standing trial for international crimes, photographic portraits of justice practitioners, and audio portraits of witnesses and survivors, thus giving a panoramic angle to the discussion as well as a physical space for it. The audio testimonial portraits, when paired with the photographs of the Justice Practitioners, will speak back to the persons in the paintings and suspend the viewer within the space of the dialogue. All the different stakeholders will therefore come together to discuss the challenges and achievements of international criminal justice. 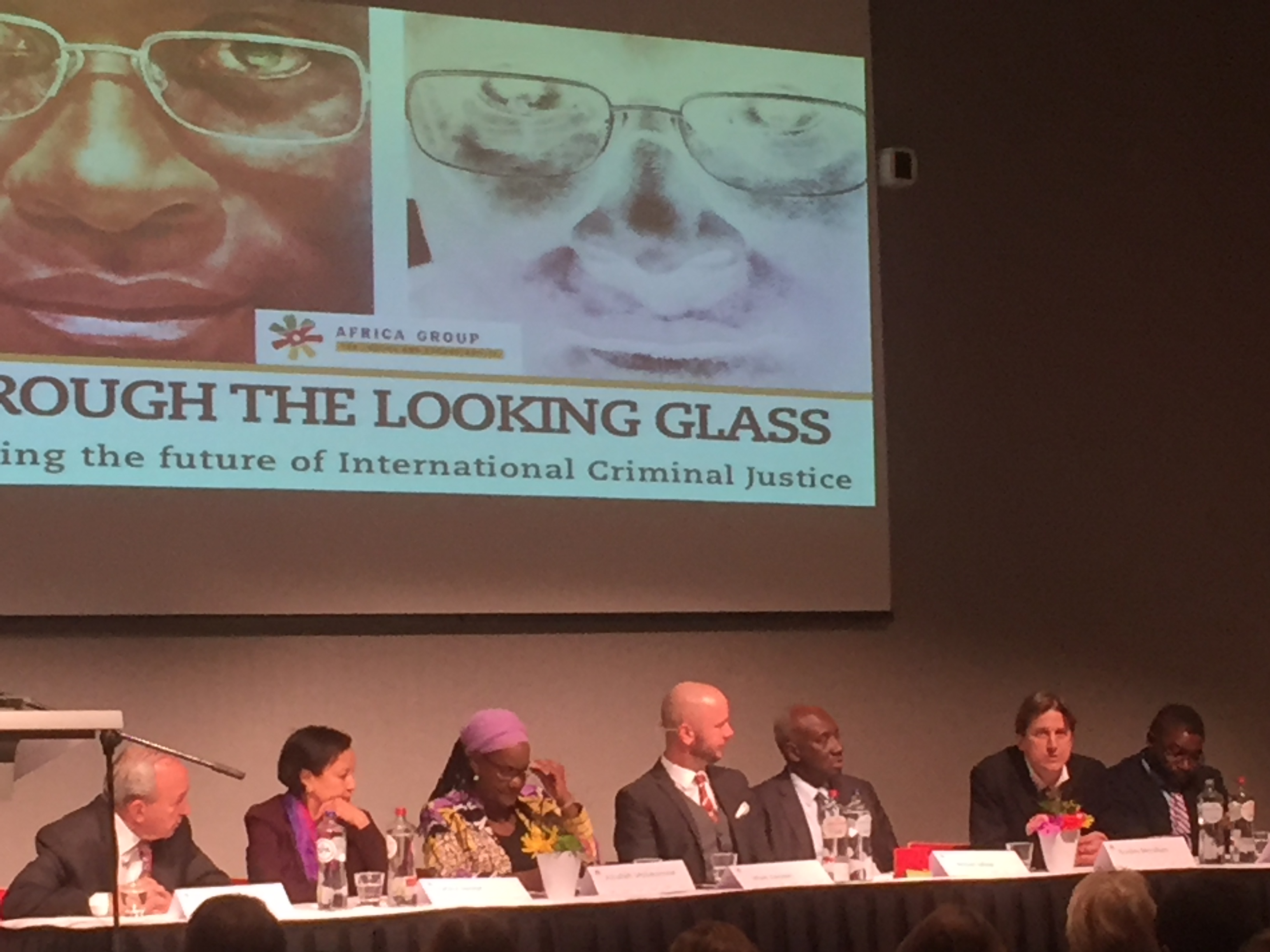 The exhibition will tour in different countries. It will launch in March 2017 in Johannesburg, South Africa, and then travel to Kampala (Uganda), Nairobi (Kenya), and Goma (Democratic Republic of the Congo). It will reach its final destination, The Hague (The Netherlands), in October-November 2017. The presence of the exhibition in these locations will be marked by special dialogues on themes such as abuse of power, accountability, presumption of innocence, peace, and justice. In this way, Bradley McCallum seeks to create an atmosphere of intimacy and empathy and draw the participation of civic-based organizations and a broad general public. The goal of this dialogue is to allow the framework of how we understand the efforts towards accountability to be more global by including non-legal audiences, but also by creating a dialogue between the different parties to the system of international justice.

You are invited to join in the Assembly State Parties side-event organized by the WAYAMO Foundation to celebrate the one-year anniversary of the creation of the Africa Group for Justice and Accountability (AGJA). The event will take place on Monday 21 November 2016 from 6 to 7.30 pm (followed by a reception) at the Marriott Hotel in The Hague, The Netherlands.
On this occasion, a panel discussion on the future of international justice and its challenges will gather members of the AGJA, as well as artist Bradley McCallum who will introduce his project entitled Weights and Measures: portraits of justice.
Organized by Conjunction Arts, Weights and Measures is an international exhibition with the aim to start a discussion on the underlying issues of international justice, through portraiture. The exhibition will take place internationally from February to November 2017 in South Africa, Democratic Republic of the Congo, Uganda, Kenya, and the Netherlands. It comprises large-scale oil paintings of defendants, photographs of justice practitioners and audio installations of witnesses and victims. A preview of the exhibition will be visible during this side-event.
Through this collaborative event, we are hoping to not only discuss the existence of a system of international justice and its challenges, but whether a culture of international justice exists today, and how it can contribute to the debate.