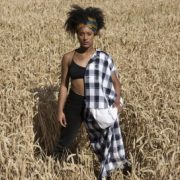 At a time when white nationalism and xenophobia is on the rise in the Netherlands, the modern dance performance Black Memories by Aya, Tafel van Vijf and Backbone provokes a timely discourse on race and racism. This multimedia performance, which was presented at the Korzo Theate in Den Haag on 4 April, is an emotionally packed bill with a playful punch. The dance unravels the legacy of racism in the Netherlands while simultaneously awakening the audiences’ consciousness on what skin color, stereotypes and discrimination means in 2019.

With seven dancers and four musicians, Black Memories transcends time by synchronizing spoken narration with modern dance, street dance, and African traditional dance styles with African, Caribbean, and western beats. The performance begins more than 300 years ago exploring the impact of Dutch colonization and enslavement and then jumps to the present and how racism plays into relationships, the media and day to day life.

The dancers are storytellers whose movement- which blends closely between flowing and spirited, sharp and snappy, and of struggle and release – creates a flow of strong and unequivocal episodes that explore injustices, power, and freedom. The performance interweaves individual stories that range from the Theory of Lynch which was used by plantation owners to rule and divide slaves to the role of parents’ in forming views on race. Videos projected behind the dancers show clips that further reinforce the subtle and not so subtle ways of intolerance in society. One video projected a Black toddler being called out by other kids, as Zwarte Piet (Black Pete) in reference to the Netherlands’ controversial Santa’s helper. Throughout the performance, the audience is challenged to confront history, as well as their own thoughts and prejudices around the issues of race and racism.

The concept, direction, and chorography of Black Memories is by Herman van Baar, Wies Bloeman and Alida Dors. The dance, which was originally performed for secondary school kids and is now on tour throughout the Netherlands for wider audiences, serves as a catalyst for discussion. This comes at a time when issues of race have emerged on the nation’s political agenda. Just last month, the Forum for Democracy’s Thierry Baudet called for the protection of “Boreal Europe” after his party became the biggest party in the Netherland’s Senate. The term boreal was widely thought to be used in a racial context, as a synonym for “Aryan,” a term borrowed from France’s Jean-Marie Le Pen.

During the second half of 2019, the United Nations Human Rights Council will carry out a comprehensive review of the Netherlands on the issue of racism. In the meantime, Black Memories will serve as a valuable performance that interconnects dance and human rights, while raising important questions regarding culture, race and values within the diversity of Dutch society.

Black Memories will be performing throughout the Netherlands until September 2019. The performance is in Dutch language. The agenda can be found here.

Ame Trandem has 15 years of experience working on the intersection of human rights and business. She has worked with communities around the world who have been impacted by infrastructure projects, in order to demand corporate accountability and seek remedy and justice. She is also a modern dance enthusiast, who has studied choreography and dance history.