Now that I put my gun down
For almost obvious reasons
The enemy still there invisible
My barrel has no definite target
Now
Let my hands work-
My mouth sing-
My pencil write-
About the same things my bullet aimed at.
© Freedom Nyamubaya

Freedom Nyamubaya took on her guerilla name when she joined the liberation movement in the late seventies in Rhodesia/Zimbabwe. She fought together with men, mostly, in order to obtain free elections and recognition of human rights for the black majority in the former British colony. When she speaks about her decision at the time to join the rebels across the border in Mozambique, the expression on her face mirrors the teenage girl that was fascinated by the spiritual power radiating from the freedom fighters, disappointed by the conservative Christian education, and denied the possibilities the white kids were offered in the seventies’ Southern Africa. 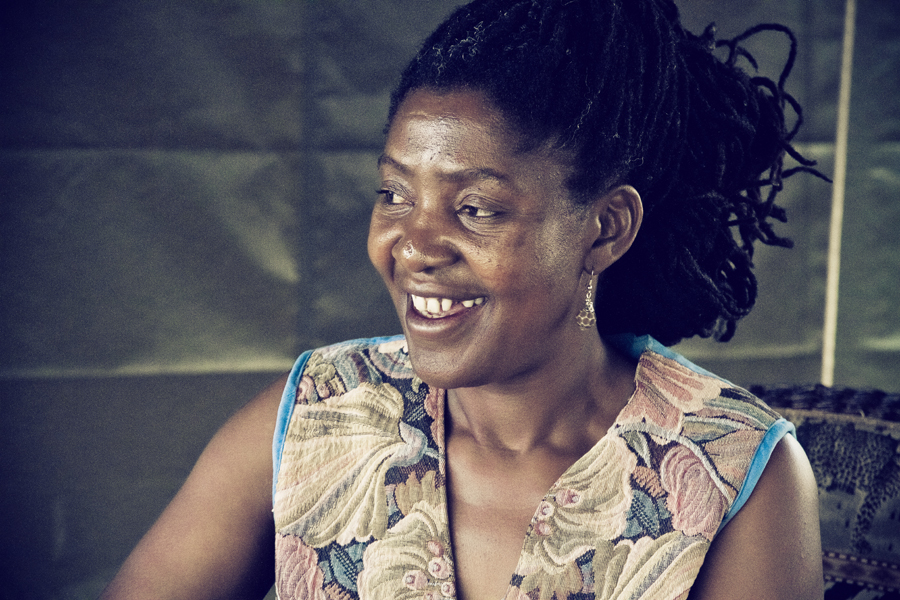 The myth that, by magic, a freedom fighter can take on the the spirits of their ancestors and change from one being into another attracted the young Shona woman to joining the rebel forces. Freedom insists on the fact that joining the forces was not only a matter of free choice but also one of action in that it was her who convinced her male classmates to cross the border and become rebels.

During the colonisation process and beyond, Rhodesia was British dominated. It unilaterally declared independence in 1965 and maintained the colonial rule alive under Ian Smith. This eventually led to a civil war that started with the uprising of the black local population and went on between 1966 and 1980. The reasons to revolt against Ian Smith may have appeared clear and simple for the majority of the black population but the individual reasons for women to join were manifold: discrimination based on gender, race, ethnicity, religious beliefs and traditions, age and social status; low social status within their own communities, therefore following a husband, brother or lover; feeling of exclusion from the communities due to indecent behavior. Some of them were also captured to provide support to the male officers, such as cooking or administrative support, or to be female companions or wives. Sexual violence and rape were reported about the military camps on both sides and several children were born on a military base or in the bush.

The time of revolution is a time when promises to end oppressions seem the most real. Ending oppression was probably the most prominent reason to join the revolutionary forces for the majority of the voluntarily recruited soldiers.

I, the defenseless:
Stand accused,

Of stealing corn
I cultivated on the soil,
Of stealing gold
I dig down the earth,
Of possessing cloth
I make in the factory,
Of staying in the house
I built myself,
Of owing labour
Which is my birth-right,
Of having been born
A right I did not choose,
Of killing the king
Who robbed my labour

The dominant ruler has different facets to its identity. So does the resistance that revolts against it and its ruling. Inequality remained not only between the black and the white populations, but also between men and women, poor and rich. Women, who have fought alongside their male comrades, are seen with a lot of controversy in the country and have a very difficult position in a post-conflict society. Female ex-combatants are rarely heard. They are hardly present at the peace table and included in shaping national or international policies and politics after the conflict has been settled. Their roles within and after the armed struggle and change in political leadership had to continuously be re-negotiated until today.

Freedom became a commander, an activist, a UN employee, a lover, a mother and a poet. She sets an example for young people in one of the poorest countries in Africa by putting together words expressing passion, beliefs and values attached to the liberation movement and the decolonized Zimbabwe, today. She has published two books with poetry and prose – On the Road Again (Zimbabwe Publishing House, Harare, 1985) and Dusk of Dawn (College Press, Harare, 1995) – and has formed her own non-governmental organization MOTSRUD (Management Outreach Training Services for Rural and Urban Development).

There has been no formal demobilization process in Zimbabwe. A lot of post-conflict violence therefore arose, the needed transformation process bringing guerilla soldiers to become civilian still being missing. Freedom tries to find the right words describing the struggles beyond the battlefield, and addressing the reoccurring tragic challenges faced by the Zimbabwean society.

There are still those of us
Who consciously organize and create
Africa’s man-made problems and make
Our suffering a career for interested scholars.
© Freedom Nyamubaya

There are still freedom fighters in Zimbabwe who do not hide, who do not shy away from criticizing dominance and inequalities. Freedom is one of these brave, beautiful and strong women who change their world and their surroundings, being aware that their struggle may never end. They are set example for the next generations. They have the knowledge of what it was worth fighting for and what is the aim of future struggles.

Once upon a time
There was a boy and girl
Forced to leave their home
By armed robbers.
The boy was Independence
The girl was Freedom.
While fighting back, they got married.

After the big war they went back home.
Everybody prepared for the wedding.
Drinks and food abounded,
Even the disabled felt able.
The whole village gathered waiting
Freedom and Independence
Were more popular than Jesus.

Independence came
But Freedom was not there.
An old woman saw Freedom’s shadow passing,
Walking through the crowd, Freedom to the gate.
All the same, they celebrated for Independence.

Independence is now a senior bachelor
Some people still talk about him
Many other take no notice
A lot still say it was a fake marriage.
You can’t be a husband without a wife.
Fruitless and barren Independence staggers to old age,
Since her shadow, Freedom hasn’t come.
© Freedom Nyamubaya

“Our life is a succession of jokes” – Two documentaries explore...

The Lady in Number 6: Music Saved my Life – A documentary on Alice Sommer,...
Scroll to top